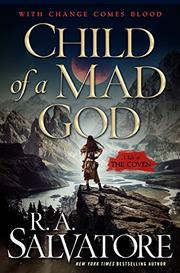 CHILD OF A MAD GOD

Salvatore kicks off a new fantasy sequence set in the world of Corona (Immortalis, 2003, etc.) but with only passing references to persons and events from previous adventures.

On the frigid slopes of the volcanic mountain Fireach Speuer—Salvatore isn’t noted for his subtlety—lives a parasitical, barbarian warrior tribe, the Usgar, whose patron is the Crystal God. Some of their womenfolk are witches of the Coven, able to command the magic of the crystals found within the mountain, crystals that make the warriors all but invincible as they plunder slaves and supplies from the villagers who live along the shores of Loch Beag at the mountain’s foot. When the story opens, Aoleyn is 3 years old, inquisitive, and active; an orphan, many years will pass before she understands her convoluted birthright. Aoleyn desperately wants to become a witch but faces many challenges, not least that an Usgar woman expects to be raped and brutalized by the warrior who chooses her as his mate. One of the matters that the narrative never clarifies is why the Usgar witches, despite their magic-crystal powers, allow the warriors to virtually enslave them. In another narrative strand, Talmadge, a trader who meanders about the Wilderlands trying to unlock the puzzle of his life, is drawn to Loch Beag. We of course assume that Aoleyn and Talmadge will meet, eventually, but it’s far from obvious why, when, or how. All this slow, quiet development allows the low-key charms of these stories and others to flourish.

Enjoyable and addictive, flaws and all.