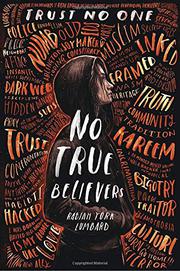 Muslim teen Salma Bakkioui, a hacker and high school senior, experiences the fallout from growing Islamophobia in her neighborhood and at school.

Salma has Ehlers-Danlos syndrome and lives with her mother (a white Muslim convert), father (who is North African Berber), paternal grandmother, and two younger sisters. First she must say goodbye to her best friend, Mariam Muhammad, whose family moves to Dubai because anti-Muslim sentiment makes it hard for her father to make a living in Arlington, Virginia. Then, following explosions in Washington, D.C., and a bomb threat at school, Salma and her boyfriend, Amir, become suspects. Meanwhile, new white neighbors have moved into the Muhammads’ old house next door, and although they seem very nice, Salma has her suspicions. She takes on the seemingly impossible and very risky task of investigating who is framing her and Amir. York Lumbard’s (The Gift of Ramadan, 2019, etc.) characters are not fully developed: Salma exhibits little growth or change over the course of the story, and Amir’s lack of flaws makes him feel two dimensional. There is a lack of consistency when it comes to defining Islamic terms. While the author correctly clarifies that “Allahu akbar” is “completely nonthreatening,” the assertion that it is “not always religious. Sometimes it’s just the equivalent of yelling ‘Awesome!’ ” is questionable. The novel moves slowly, with numerous digressions that are not well integrated and that pull readers away from the main storyline.

A thriller that fails in cohesiveness and forward momentum. (Thriller. 13-17)