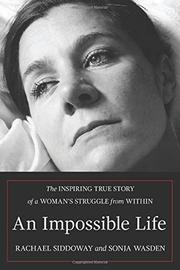 The Inspiring True Story of a Woman’s Struggle From Within

“I may have put in the hours to write this story, but she put in the years and lived it,” Siddoway remarks in the authors’ notes about her mother, Wasden. Written from Wasden’s first-person perspective, the book opens in 2007 in an emergency room in Baton Rouge, Louisiana. Wasden was almost 40 years old when her family began to worry about her mental health and her husband, Mitch, decided to hospitalize her. At the time, she believed that she was simply “overstressed” from supervising house renovations, dieting, and home-schooling three children. But when asked the question “Do you want to die?” by a crisis worker, Wasden replied with a firm “yes.” The memoir tells of her involuntary admission to a psych ward, describing in detail the eight days of her stay, interspersed with episodes from her earlier life. She recalls the soporific effects of the antipsychotic pills she was administered: “They would torture me and save my life all at the same time,” making her feel “a type of sleepiness I had never experienced before.” The volume also skips back to 1999, when Wasden was self-harming with steak knives, and to 2000, when she was obsessing about losing weight. The close of the work examines her time as a recovering psychiatric patient, her lapses and perseverance, and the effects of some devastating family crises.

This is an elegantly written memoir that lays bare the progression of mental illness. It deftly pinpoints the moment when, as a young adult, Wasden began grappling with the responsibilities of daily life: “I don’t want to be an adult anymore. I don’t want to be pregnant. I don’t want to live in Michigan. I want to be a sixteen-year-old kid again.” This is juxtaposed with descriptions of later self-harm that are captured with unflinching clarity: “I reached up toward the steak knife on my desk—the only medicine I had to dull the agony. I grabbed it and started to cut the bottoms of my feet. It stung. The times the pain got bad enough to cut it felt like tidal waves were swallowing me, rolling me through an angry sea.” Keenly observant, with sharp, natural dialogue throughout, the book also recognizes the impact that living with someone with mental health issues has on others. Siddoway’s outburst regarding her mother’s suicidal tendencies delivers a shuddering impact: “My whole life has felt like one sick game of jack-in-the-box. We’ve all been tiptoeing around the idea that you could disappear one day and never come back!” The memoir would benefit from a more considered conclusion, although the authors do suggest that this work is part of a series, which would partially excuse its open-endedness. Nevertheless, the power of this story is that it allows readers to enter the mind of an individual suffering from a mental health disorder and begin to understand her thoughts and actions. This erudite book could prove insightful for patients, caretakers, and therapists alike.