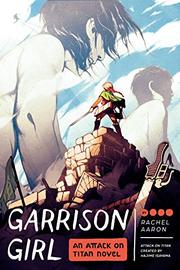 An Attack on Titan Novel

Humans have been living behind a walled fortress since grotesque giants, called titans, began attacking villages and making meals out of the human inhabitants. As a member of the nobility, Rosalie Dumarque has never been outside the inner walls that protect those of her status. Because the white 16-year-old only has six more months of freedom before she must marry an older man to boost her family’s wealth, she hopes to make use of her Royal Military Academy training to become a soldier and see the world. In this action-packed story, the unlikely heroine manages to procure the very worst assignment: protecting the walls against titan attacks at the Trost Gate Garrison. From Day 1, Rosalie enters into vividly depicted battles against these beasts. The time in between leaves her opportunities to become closer to squad mates, especially blue-eyed Jax, her commanding sergeant, and to begin questioning her identity as a young woman and what—if anything—she really owes her family. Although the quick, predictable plot builds to a frenetic pace, mysteries surrounding the various titans will keep readers involved up to the conclusion. An open ending leaves room for a series to develop.

For teens who want the female protagonist to kick ass more than kiss.