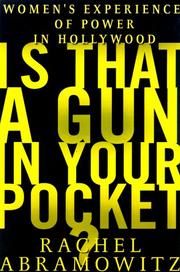 IS THAT A GUN IN YOUR POCKET?

Women's Experience of Power in Hollywood

From countless interviews with Hollywood's female elite, Abramowitz compiles a mesmerizing account of the sometimes-ugly confluence of sex, power, and celebrity amid the tarnish of Tinseltown.

Beginning and ending with the death of studio chief Dawn Steel, Abramowitz (Premiere magazine) describes a Hollywood landscape lush with money and power, as well as the rampant sexism that still hinders any woman who wants to grab a piece of the action. Despite the obstacles, many women succeed in these predatory waters, and their stories simultaneously shock and inspire. Abramowitz gives us the full range of Hollywood, from Barbra Streisand's eventual triumph in filming Yentl to Jodie Foster's trauma as the assassination-inspiring wunderkind of Taxi Driver. Sex, of course, is never in short supply, from the affair between Cybill Shepherd and Peter Bogdanovich on the set of The Last Picture Show to the rumors that have long dogged studio head Sherry Lansing that she slept her way to the top. Celebrity may sell in Hollywood, but one of the strengths of Abramowitz's exposé is that she gives us the stories of the women behind the scenes as well. We see, for example, Callie Khouri's creation of Thelma and Louise and Carrie Fisher's odyssey from actress to script doctor, as well as snapshots from the long careers of such Hollywood mainstays as writer Nora Ephron, agent Sue Mengers, and director Elaine May. These topics provide only a brief sampling of Abramowitz's tales: the beauty of the book lies in its encyclopedic ability to address almost every notable woman in Hollywood over the last 30 years.

Abramowitz's strength as a writer emerges in her ability to let her subjects speak candidly and openly about their experiences and passions; the resulting collection celebrates Hollywood's irrepressible ability to entertain while plumbing the dark reaches of its soul.