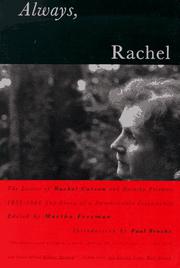 A profusion of artful letters, the greater part from the mellifluous pen of Carson, detailing everyday life while writing The Edge of the Sea and Silent Spring. It's a wonder that Carson ever had a spare moment to churn out her books, considering the sheer tonnage of letters she produced and the obvious care and attention that went into every one. The letters from Freeman — Carson's Maine coast neighbor — can also be a pleasure, with their descriptive energy (editor Martha Freeman is her daughter), but the bulk are Carson's, and there lies the main interest. Carson's letters are deeply personal, and access to them has the quality of secretly sharing an intimate conversation floating over from a nearby café table: "... always the sense of your presence, and your sweet tenderness, and love was very real to me." There are forays into nature writing, with much birding and poking around tidal pools; and — this is the correspondence of two friends, after all — there's talk of furniture and clothes, hair styles and manicures. Carson, not surprisingly, is most compelling when expressing how she feels about her writing: her fears concerning its quality; the frustrations and satisfactions of research; the joys of having William Shawn tell her that the first draft of Silent Spring (which was serialized in the New Yorker) was "a brilliant achievement...full of beauty and loveliness and depth of feeling." Medical problems plagued both the Carson and Freeman families; Carson's later letters are riddled with one bit of bad news after the next, from rheumatoid arthritis to iriditis, to metastasized cancer. Yet her gradual decline is related so sparingly and with such mettle, it is overpowering. Darting, fresh, sensuous, pleasingly elliptical at times, these letters also serve to tether the increasingly deified Carson firmly to earth — just where she'd want to be.