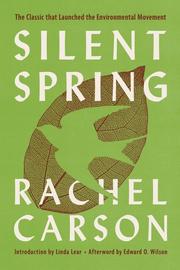 It should come as no surprise that the gifted author of The Sea Around Us and its successors can take another branch of science—that phase of biology indicated by the term ecology—and bring it so sharply into focus that any intelligent layman can understand what she is talking about.

Understand, yes, and shudder, for she has drawn a living portrait of what is happening to this balance nature has decreed in the science of life—and what man is doing (and has done) to destroy it and create a science of death. Death to our birds, to fish, to wild creatures of the woods—and, to a degree as yet undetermined, to man himself. World War II hastened the program by releasing lethal chemicals for destruction of insects that threatened man’s health and comfort, vegetation that needed quick disposal. The war against insects had been under way before, but the methods were relatively harmless to other than the insects under attack; the products non-chemical, sometimes even introduction of other insects, enemies of the ones under attack. But with chemicals—increasingly stronger, more potent, more varied, more dangerous—new chain reactions have set in. And ironically, the insects are winning the war, setting up immunities, and re-emerging, their natural enemies destroyed. The peril does not stop here. Waters, even to the underground water tables, are contaminated; soils are poisoned. The birds consume the poisons in their insect and earthworm diet; the cattle, in their fodder; the fish, in the waters and the food those waters provide. And humans? They drink the milk, eat the vegetables, the fish, the poultry. There is enough evidence to point to the far-reaching effects; but this is only the beginning,—in cancer, in liver disorders, in radiation perils…This is the horrifying story. It needed to be told—and by a scientist with a rare gift of communication and an overwhelming sense of responsibility. Already the articles taken from the book for publication in The New Yorker are being widely discussed. Book-of-the-Month distribution in October will spread the message yet more widely.

The book is not entirely negative; final chapters indicate roads of reversal, before it is too late!