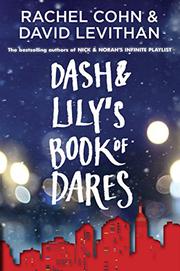 Grudging hipster love story meets un-ironic Christmas romance in this dual-narrator tale—an awkward but ultimately acceptable pairing not unlike that of the two title characters. One afternoon in late December, pretentious, world-weary Dash visits “that bastion of titillating erudition,” New York City's Strand Bookstore. Next to a copy of his beloved Franny and Zooey, Dash discovers a red notebook with instructions inside for a sort of scavenger hunt through the store. He responds with an assignment of his own, and soon he and the elusive Lily are sending each other on absurd adventures throughout the city. The two are ringed by a merry band of side characters—among them, an unnervingly friendly department-store Santa, a big-hearted oaf and a pair of gay, fedora-topped “unorthodox Jews”—but the real show-stealer is Lily, an unabashed cookie-baking, embroidered-reindeer-skirt-wearing, dog-loving and ever so occasionally tantrum-throwing force of nature. Believable? No. Formulaic? A bit. But good fun, with some wisdom to boot. (Fiction. 12 & up)