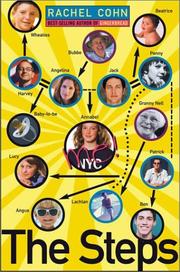 An oh-so-New-York 12-year-old struggles to sort out her relationship within what might be called the ultimate blended family (the front cover has a helpful diagram of all the relationships). Annabel has the sort of relationship with her parents where she calls them by their first names. Even after they split, all was pretty much okay until Jack moved to Australia to marry Penny, become Angus and Lucy’s stepdad—an eventuality that has Annabel seeing red—and father Beatrice. Annabel doesn’t really want to go to Australia over the Christmas break, but she does, hoping somehow to steal her father back. What she discovers, however, is that he’s happier than he ever was and is utterly disinclined to move home, however much he misses her. When Lucy and Annabel, at first enemies but later, convincingly, good friends, sneak off on a trans-Australia train trip, they set into motion a family crisis that brings all members of Annabel’s family to Sydney (including her new stepfather- and stepbrother-to-be; it’s been a busy vacation for her mother, too) in a sort of giant group hug that, however unlikely in the real world, is nevertheless a nicely satisfying way to end the story. It is a relatively predictable tale of raw feelings, jealousy, new friendships, and reconciliation, but it is enlivened both by Annabel’s sassy voice and by the acuity of her observations: “I had . . . never met them, and I knew that in those two years they would have developed a secret family language only they could understand.” If there’s rather a lot of parent-to-child explaining about love and relationships, readers can still only hope that their own families can sort themselves out as well as Annabel’s. (Fiction. 11-14)