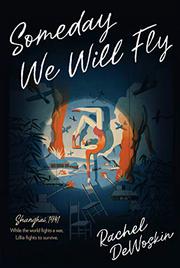 SOMEDAY WE WILL FLY

During World War II, Lillia and her Polish family struggle to make a new home in Shanghai.

DeWoskin (Blind, 2014, etc.) explores a rarely depicted topic: the struggles of the Shanghai Jewish refugees. Lillia’s parents, Stanislav Circus acrobats, are performing their last show when the event is raided. Her mother is lost in the confusion, and Lillia, her father, and her developmentally disabled baby sister flee Warsaw, traveling by land and sea to China. Part of Lillia rejects what is going on around her, in innocent disbelief at what people are capable of doing to one another, while another part revels in small freedoms, wandering the streets of Shanghai unmonitored, amazed at discovering a Jewish community in this foreign land. There, in a place where she begins to hate the hope she harbors that her mother will find them, Lillia both discovers new strength and plunges into new depths of desperation, driven to do things that would surprise and appall her old self. Though the instances of Chinese romanized text are missing all tonal marks that denote pronunciation and meaning, English translations are given. The vivid characters are flawed and evolve, sometimes according to or despite their circumstances. Particularly fascinating is the juxtaposition of the plight of Jewish refugees with that of the Chinese living in a Japanese-occupied Shanghai.

A beautifully nuanced exploration of culture and people.