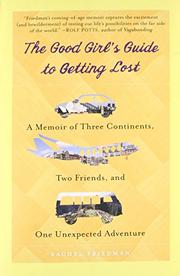 THE GOOD GIRL'S GUIDE TO GETTING LOST

A Memoir of Three Continents, Two Friends, and One Unexpected Adventure

A memoir of two years in the life of a slightly muddled collegiate who sought clarity by traveling the world on a shoestring budget.

Like so many students nearing the end of their undergraduate studies, Friedman (Literature/John Jay Coll.) had no idea of what would come next. In an attempt to resolve her confusion, she set out for Ireland the summer before her senior year. Wheeling a massively overpacked red suitcase behind her, Friedman settled into a bohemian lifestyle of waitressing, bartending, drinking and dancing in Galway and beyond. An Australian housemate named Carly became the “wise life guide” who showed Friedman the virtues of traveling—and living—without a set plan. A year later, newly graduated from college and as unwilling as ever to settle down, the author gratefully accepted an invitation from Carly to visit her in Sydney. After living, working and traveling around Australia for a few months, Friedman and the ever-restless Carly headed to South America. The two “trapezed” their way across Argentina, Bolivia and Peru, negotiating dodgy accommodations, thieves, dangerous roadways, altitude sickness and food poisoning. Along the way, Friedman discovered that “people and places and experience” were far more important than possessions and that the present moment should be celebrated. Watching the narrator evolve from a fearful, immature young woman into a take-charge traveler is a pleasure, but the author’s insights tend toward the disappointingly banal.

Well-written and well-paced, but may have limited appeal.