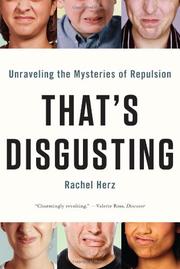 Unraveling the Mysteries of Repulsion

Herz (Psychology/Brown Univ.; The Scent of Desire, 2007) examines the strange world of disgust and discovers that, to a large extent, it’s all in the mind of the beholder.

“The emotion of disgust is universal,” writes the author, “but it is not innate; disgust has to be learned and is subject to a myriad of influences.” If the most elemental purpose of disgust is to engender an avoidance of rotten and toxic food, it mostly arises from our cultural heritage and those pockets of the brain that remind us of our mortality and animalistic selves. Herz closely hews to current research on disgust, but she also salts the narrative with anecdotal material and intriguing vignettes, which gives the book a high entertainment factor as she wades through the scientific matter. The author tackles aspects of both physical and moral disgust and convincingly finds in them a protective impulse—“disgust is a type of fear—a special type of fear that evolved to help us evade a slow and uncertain death by disease.” Moral disgust is a more slippery character, with all the illogical reasons we deploy to find something immoral, though Herz suggests that moral repulsion isn’t only a threat: “More abstractly, but just as ominous, being around the badness of immoral people might sully your inner, spiritual self or soul.” She touches down on food and lust, self-empathy and how disgust piques our curiosity of that ultimate mystery, death. Finally, she notes that disgust is a luxury, an embarrassment of our riches: When survival is at stake, we will eat anything, mate with anyone and enlist anyone’s support.

“The greatest pleasures are only narrowly separated from disgust,” said Cicero. In this multifaceted book, Herz expertly walks that tightrope.