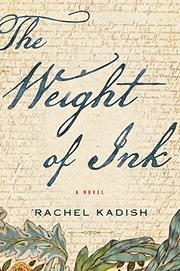 THE WEIGHT OF INK

A mysterious collection of papers hidden in a historic London home sends two scholars of Jewish history on an unforgettable quest.

When Helen Watt receives a phone call from a former student about centuries-old documents secreted away in his posh residence, she doesn’t hold out much hope for their importance. Close to retirement, Helen’s seen it all. But a cursory look at the papers tells her she’s holding something special. She returns to the house with Aaron Levy, an eager American graduate student, in tow. Despite butting heads over process, the unlikely pair of literary detectives uncover a stunning truth: the writer of the documents is a 17th-century woman who chronicled the Jewish diaspora, from the horrors of the Spanish Inquisition to the rich trade city of Amsterdam and the relative safe haven of London. Kadish (I Was Here, 2014, etc.) deftly weaves contemporary scholarly intrigue with the voice of Ester Velasquez, an incandescent 17th-century mind who longed to engage with the brilliant men of her day. “Here I begin,” writes Ester in her very first attempt. “I am one soul in a great city.” Ester risks everything to wrestle with ideas that counter rabbinical teachings, developing a secret identity to protect her family from harm—and relishing her newfound freedom. Clocking in at almost 600 pages, the novel could have used a judicious pruning to highlight the intellectual game of cat and mouse that plays out across four centuries. Still, Kadish’s characters are memorable, and we’re treated to a host of them: pious rabbis and ribald actors, socialites and troubled young men, Mossad agents and rule-worshipping archivists. From Shakespeare’s Dark Lady to Spinoza’s philosophical heresies, Kadish leaves no stone unturned in this moving historical epic.