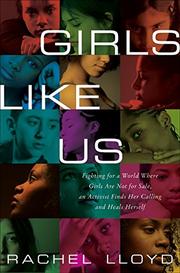 Fighting for a World Where Girls Are Not for Sale, an Activist Finds Her Calling and Heals Herself

A former sex worker shares her harrowing history while exposing the ugly truth about young girls who sell their bodies to survive.

Alternating between her own story and those of the girls she has dedicated her life to helping, Lloyd, founder of the nonprofit GEMS (Girls Educational and Mentoring Services), describes how poverty and abuse create a conflagration of circumstances under which it is commonplace for girls as young as 11 to be commercially trafficked. Born in Britain, Lloyd watched helplessly as her mother descended into drunkenness and despair, and she left home at 13. Like the adolescents she now helps, the author was desperate for love, acceptance and stability. She found it with a man who turned her out on the streets and routinely terrorized her, but she eventually escaped and embarked on her life’s mission of helping others in similar circumstances. Lloyd points out that underage girls molested by one individual are considered victims, to be protected, but when commercially exploited, they are seen as teen hookers and punished. She exposes the brutality punctuated with kindness with which pimps enforce compliance, comparing their methods to those utilized in hostage situations resulting in so-called Stockholm Syndrome. While control is maintained through violence, these adolescents—who may seem sullen and resistant to intervention—are considered to be complicit in their own abuse. Lloyd fought successfully to change New York state law resulting in the Safe Harbor for Exploited Youth Act, making it the first state to protect rather then prosecute, but she argues that we must all embrace language to reflect this understanding—stipulating that the term “teen prostitute” conveys a pejorative choice rather then the reality of commercial exploitation and trafficking. The author acknowledges but does not directly address males in similar circumstances, but any at-risk child is covered under the new law.

A painful yet powerful book that asks readers to examine personal prejudices, find compassion for those most view as throwaways and recognize child abuse however it manifests.