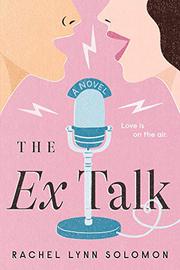 To save their jobs, rival public radio co-workers pretend to be exes for a new show and end up getting much more than they bargained for.

Shay Goldstein hates her new co-worker, Dominic Yun. The 29-year-old senior producer has been with Pacific Public Radio for 10 years but has never realized the dream of hosting her own show. Dominic, 24 years old and armed with a master’s degree in journalism from Northwestern, which he obnoxiously mentions every chance he gets, is already breaking big news on the air. Their competition boils over during a stationwide brainstorming session when Shay suggests starting a new dating show hosted by exes, and Dominic writes it off as tawdry commercial radio. But their shouting match has unexpected consequences when the station's program director tells them their verbal sparring and obvious tension would make them the perfect hosts for Shay’s show—and that it just might save them from upcoming layoffs. Of course, there’s one huge problem: They’ve never actually dated. As the show skyrockets in popularity, the fake exes become real friends, but a growing attraction might spell disaster. Shay and Dominic are brought to life with multilayered backstories. Shay shared her passion for radio with her late father, and she often wonders what he would think about her career choices; Dominic is determined to make a positive impact with his journalism degree but is unsure how to do so in the world of click-bait content. Witty dialogue meets steamy slow-burn tension while fun romance tropes (fake dating! there’s only one bed!) take a refreshing turn by making Dominic the less sexually experienced, and more emotionally open, of the two. A vibrant supporting cast of family, friends, and co-workers helps round out the plot.