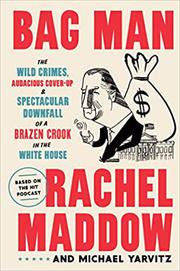 The Wild Crimes, Audacious Cover-up, and Spectacular Downfall of a Brazen Crook in the White House

MSNBC host Maddow and producer Yarvitz present a book version of their podcast about the misdeeds of former vice president Spiro Agnew.

Given the continuing malfeasance emanating from seemingly every corner of the Trump White House, the text is certainly relevant. However, as with many podcast-to-book translations, the narrative doesn’t quite engage on the same level. This by-the-numbers dip into the murky waters of American political corruption does serve as a welcome reminder that, unlike today, in the case of Agnew, political crimes were actually punished (and in a nonpartisan fashion). Although Agnew is more or less a political/historical footnote, the authors note that he had the dishonorable distinction of being the only sitting vice president ever convicted of a felony. His crime was tax evasion, but he had also taken bribes and kickbacks during a previous stint in local Maryland politics. In 1973, Agnew became the only vice president to resign from office in disgrace; yet because he was not part of Nixon’s inner circle, he had nothing to do with the break-in at the headquarters of the Democratic National Committee. Despite a professed patriotic love of America, he just didn’t want to pay his fair share in taxes. Despite the sensationalist subtitle and hip, often lively tone, the narrative fails to make Agnew’s story any more riveting than a long-form magazine article—or podcast. The authors clearly did their due diligence when it comes to research, but while they make some effort to present Agnew’s attack-dog political tactics as the precedent for Trump’s tirades against anyone who opposes him, this connection is not emphasized enough. It’s also commendable that Maddow and Yarvitz spotlight the long-unsung prosecutorial team that took down Agnew, but the description and pacing of the trial scenes make that section feel anticlimactic.

A well-meaning but disappointingly dull slice of an otherwise dramatic era in American political history.