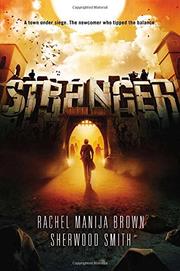 Yes, it’s another post-apocalyptic series opener, but it’s infused with a generous spirit—call it a utopian dystopia.

The small, walled community of Las Anclas bears little resemblance to Los Angeles, whose ancient ruins sprawl nearby. To Ross, a badly wounded prospector fleeing a powerful enemy, it’s paradise compared to what he’s used to—to its residents, not so much. Yuki misses the freedom of the wild ocean and dreams of escaping with Paco. Engineer Mia loves blowing things up, but she feels socially awkward. Felicité, the daughter of the mayor and defense chief, knows precisely what she wants: to make half of a power couple with Indra, Jennie’s boyfriend. Jennie herself is delighted to be chosen as a Ranger, the town’s elite defense corps; she’d feared that prejudice against the Changed, people like her who’ve acquired strange powers, made her a long shot. Mia and Jennie, best friends, find themselves attracted to secretive Ross. Characterization is rich and stereotype-free. For gays and lesbians, sexual orientation is neither more nor less a defining characteristic than it is for heterosexuals. Equally exceptional is the depiction of conflict. The confusing adrenaline rush of war is followed by PTSD, its lingering afterimage. The five dynamic narrators and action-packed plot deliver thrills while slyly undermining genre clichés.

A first-rate page turner that leaves its own compelling afterimage.