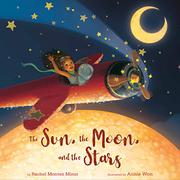 THE SUN, THE MOON, AND THE STARS

A lyrical ode to the children.

The speaker remains unidentified in second-person text, which addresses three children in turn as “you” while also implying child readers. Soft-focus illustrations lend specificity by placing each child in the context of family and interests. First is a child of color in a family that appears to be composed of an Asian father, White mother, Asian grandmother, and biracial younger sibling. The narrator assures the child that “You are like the sun… / rising every day / with your energy and light.” The illustrations depict the child in a bright yellow dress, singing and dancing for the family and then taking the stage before a crowd while yellow confetti falls from the sky and a white dove swoops overhead. Next is a blond, White child who is “like the moon… / sometimes full and big, / sometimes new and small.” This child is depicted as an animal lover doting on a family of kittens they find in a box and bring home to parents and two siblings, all of whom present as White. Finally, a Black-presenting child is likened to “the stars in the night sky, / lighting the way for all to see— / even on their darkest night.” This child wears aviator goggles and plays with a toy airplane as mother and father, both also Black, encourage their offspring’s interest by gazing at the sky as a family before the child takes flight.(This book was reviewed digitally.)