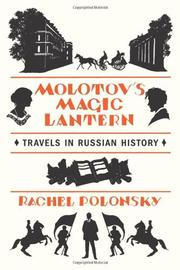 Journalist Polonsky (English Literature and the Russian Aesthetic Renaissance, 1998) steps back into a near-vanished world of Soviet and Russian history.

Having moved to Moscow from England, the author and her family lived on Romanov Lane, in the apartment just below where Stalin’s henchman Vyacheslav Molotov resided during the last years of his life (d. 1986). Polonsky was invited by the current resident to poke around the flat, and through his library she was able to illuminate “discrete moments” from Russian history as through a magic lantern: “Russian history and the Russian present have revealed themselves to me in glimpses,” she writes, “through a narrow lens, like the faded images waiting for light in this antique slide projector.” She was spurred in her scholarly pursuits by her own intensive reading. Throughout the narrative, she returns to her favorite works, including Walter Benjamin’s Moscow Diary, Dostoevsky’s novels and the poetry of Osip Mandelstam. Romanav Lane was the rarefied address, successively, of the Russian aristocracy of “old Moscow,” intriguers during the Revolution, the Soviet nomenklatura and today’s wealthy financiers. Polonsky ventured on expeditions to far-flung cities such as Lutsino, a dacha colony above the hills of Moscow where distinguished scientists loyal to the Soviet state were offered summer homes; Mozzhinka, where Stalin’s reluctant president of the Academy of Sciences, Sergei Vavilov, wrote his private memoirs; and some of the sites sacred to Chekhov, a favorite writer of Molotov as well as the author. She also visited Vologda, where “any individual who ever opposed the power of the state is likely to have passed through”; the northern cities of Archangel and Murmansk; and several Siberian towns—all in search of swiftly disappearing traces of these complicated, tragic lives.

A meandering, reflective, satisfying, intimate discovery of Russian history—though it may be too academic for many general readers.