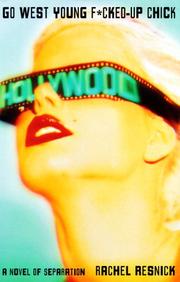 Hollywood first novel, bravely bizarre and splintered as a mosaic, like pieces of Bruce Wagner and Nathanael West glued into a window sunlit with despair. Well, what does a 20-year-old heroine, who finds her suicidal, alcoholic mother hanging by her neck in the bathroom, have going for her? Not much. So Rebecca Roth gets into her shamefully beat-up yellow Toyota Corolla and drives cross-country to L.A., where she falls for super-charismatic black stud/French scholar Isaac, supports him with her $120-a-week job assisting celebrity reporter Darlene on Entertainment Tonight, visits sound-stages, helps locate celebs at parties, sits pretty with Austrian muscle-man Arnold (known here as Helmut Grosskopf), finds herself pregnant on the same day as she kicks out Isaac—and then must get an abortion. If that sounds like a storyline, it isn’t. The novel is pieced together in fragments, some only a third of a page long, giving us an airless, spirit-choking survey of stars, restaurants, and Rebecca’s largely lowlife existence: “I was exultant. Even breathed the thick poison, liked the way it filled my throat.” Reluctantly, she briefly tries therapy for abused children of alcoholic parents, not thinking herself abused, yet haunted by grungy, horrible dreams of her dead mother. Sleeping with kooks and a rocker from the Meat Puppets, fielding paranoid phone calls, encountering a middle-aged nut in the Laundromat who thinks he’s Gene Autry’s son and has a postcard of Gene to prove it, Rebecca fails to make much sense of the nightmarish Day-Glo landscape forever bopping the reader’s eyes, billboards, shaved palm trees, all in a technicarnal brilliance . An apocalyptic Wiley Coyote cartoon, or a lipstick kiss on a napkin kept in a bureau as a souvenir of hapless days when you were underpaid, little-known, and shivering.