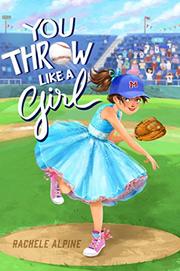 Twelve-year-old Gabby is having the worst—or possibly the best—summer ever.

Because her dad is deployed overseas, she and her mom and baby sister will be spending the entire summer with Grandma instead of the usual short visit. Gabby has promised her father that she will lead the town’s girls’ softball team to a championship, but this year there’s only an all-boys baseball team. Her mother is urging Gabby to participate in the town beauty pageant, which she won several times. Gabby is so anxious to please both her parents that through a series of mix-ups and deceptions, she signs up for both events. Although there is no description in the text, cover art indicates that Gabby is white. For the baseball team she is Johnny Lofton, hiding her hair under a cap and copying the behavior of the boys. As for the pageant, she fights to preserve something of herself amid the ruffles and flourishes and backbiting competition. She clings to her dad’s mantra of “strong, steady, strike” to get through. She has good intentions but must find a way to undo the chaos she causes. Readers will root for Gabby and empathize with her dilemma. Alpine deals with Gabby’s emotions with humor and compassion, but stereotypes of both genders loom large, and it all turns out a bit too neatly.