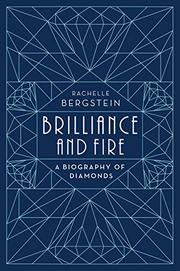 A Biography of Diamonds

Bergstein (Women from the Ankle Down: The Story of Shoes and How They Define Us, 2012) provides a history of diamond mining and marketing that reveals the deadly world behind this magical stone.

Cecil Rhodes (1853-1902) must get the credit and blame for cornering the modern-day market when diamonds were discovered in South Africa. After absorbing the Kimberley Mine, Rhodes dominated every aspect of the diamond industry, from mining to distribution to marketing. He bought up and bought out others, and when diamonds were found in Tanzania, Botswana, Lesotho and off the coast of Namibia, he controlled them, as well. His business plan was to control output and stockpile stones to ensure the rarity of the gems and raise prices. He had a complete monopoly by 1888, and his company became De Beers. Rhodes was the prime minister of the Cape Colony, founder of Rhodesia, and the author of the injustices of apartheid. In addition to this history, Bergstein has great fun exploring the customers for these diamonds, whether they were royalty, Hollywood stars, or rappers. Probably the most interesting part of the book deals with the jewelers and the crafters who knew their customers and invented new ways to adorn them. The great designers—Cartier, Tiffany, Harry Winston, and Bulgari—often took chances, and they paid off. De Beers’ best move came in 1938 when they hired N.W. Ayer & Son to advertise their product: the company came up with the idea of diamond engagement rings and the slogan “a diamond is forever.” De Beers couldn’t control the market forever, however, and soon the Japanese, the Australians, and the Canadians were nibbling away. Competition, the advent of synthetic and imitation diamonds, and the conflict (or blood) diamond crisis all play a part in this fascinating story, well told by the author.

Bergstein’s book is an informative, well-written, and entertaining window onto another way of life.