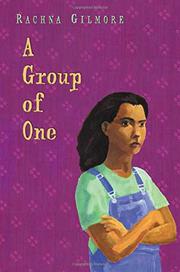 A GROUP OF ONE

Irreverent and sassy, Tara-My-Stara (as her hip mom calls her) is determined to be a “regular Canadian,” not a hyphenated one. Gilmore (Mina’s Spring of Colors, not reviewed, etc.) has lived in India, England, and Canada, just like Rohini, Tara’s mom, and she writes realistically about this family from India who don’t emphasize their cultural background to any great degree. Tara’s Social Studies teacher and some of the kids in her class want to define her as different (in positive and negative ways), but she resists this notion, knowing that she has lived in Ottawa all her life. Her 15-year-old typical teenager’s life is upset by two other events. She meets Jeff, a young man who has just moved to town, and her paternal grandmother, a staunch Indian Nationalist, comes to visit for the first time. Naniji seems most critical of her son’s wife, Rohini, her Western ways, and her lack of traditional respect, but she is probably saddened by the fact that her son chose to live in Canada with his bride. Tara takes her mother’s side and refuses to warm up to her grandmother until a school assignment encourages Tara to interview her. When she learns more about her family’s role in Gandhi’s “Quit India” campaign in 1942, she begins to realize that her grandmother is more than just a stern old woman who can’t adjust to new ways. Tara’s first-person narrative flippantly relates the ups and downs of contemporary family life and the on-again, off-again relationships with Jeff and Erin, her longtime best friend, but her teenage voice tends to veer toward an overuse of words like “crappy.” This independent heroine wrestles with the themes of cultural identity and personal individuality, adolescent issues in Canada and the US. Development of some minor characters is weak (Raj, the father, never comes to life), but Tara, Rohini, and Naniji are strong women who fight back against the tone of didacticism that sometimes floats to the surface. (Fiction. 11-14)