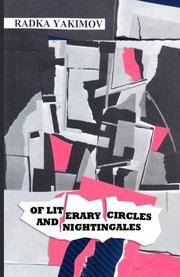 Of Literary Circles and Nightingales

Yakimov (Ashes of Wars, 2011, etc.) tells the story of several interconnected people in Bulgaria in this novel.

In a series of interlocking episodes that move across time and locality, the author introduces the reader to life in Sofia under communism. Nedah is under pressure from her parents to marry the brother of a co-worker in order to extend her valued citizenship to him, though she thinks the much-sought-after prize isn’t nearly as important as it’s cracked up to be. “I must be worth more than a Sofia citizenship,” she muses. Her friend Vera is anxious to get married, but the man she wishes to wed drags his feet. She seeks out a fortuneteller for advice, but what she hears is not to her liking; upon returning home, she swallows a hundred chloroquine pills in a suicide attempt. The narrative shifts to tell the stories of some of Sofia’s exiles: there is Svetozar Stoimenov, a recent university graduate locked into a three-year contract at a job he despises, who manages to escape Bulgaria for a new life abroad. Then there is Stephan Filipov, a man who successfully eludes capture following the execution of politician Nikola Petkov but has left his family back in Sofia to an unknown fate. Connecting the tales is a narrator, now far removed from Sofia and the time period, who uses memory and digression in an attempt to understand the past. Yakimov writes in a deliberative prose that seeks to replicate the ennui of her characters while also slipping in the occasional moment of wryness: “They had to find ways to overcome the consequences of the misfortunate fact of having been brought into this world in a place not entirely to their tastes, a condition usually discovered on reaching maturity.” A short novel at only 116 pages, it follows an unorthodox path, its story meandering much like its protagonists through the haunted, otherworldly streets of Sofia. While not exactly a page-turner, the spell of Yakimov’s prose should ferry patient readers to the end, and they will likely be grateful for the experience. A compact, but wide-ranging tale of dislocation in Sofia.