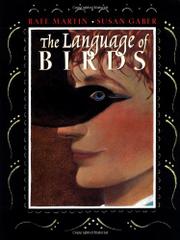 THE LANGUAGE OF BIRDS

In this sketchy but elegantly appointed version of a Russian folktale, one brother gets further with kindness than another does by being clever. As a reward for rescuing a baby bird, Ivan is taught bird language—an ability that not only repeatedly allows him to save his reckless, quick-tongued brother, Vasili, from disaster, but ultimately wins him the czar’s daughter. Framed in black, with running borders of delicately drawn feathers or bird tracks, Gaber’s acrylics, multilayered and thinly applied over a golden undercoat, have an appropriately rich, exotic look, and the different personalities of the brothers are clear to see. Readers may wonder why Vasili never shows a trace of ill feeling at having his fat snatched from the fire so much by Ivan, and how their father, fulfilling a prophecy, comes to be the ragged, unrecognized beggar who shows up near the end—but Ivan’s dreamy gentleness sets a pleasant tone, and the tale’s point is made without sermonizing. (Picture book/folktale. 7-9)