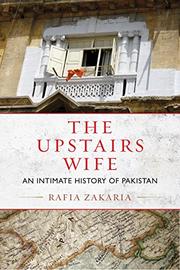 One woman's personal agony reflects the enormous chasm of inequality between the sexes in Pakistan.

A Pakistani journalist and human rights activist now living in America, Zakaria tells the disheartening tale of Pakistan’s history of military rule and Islamist misogynist oppression through the stories of her own family members, especially that of her Aunt Amina, who was forced to accept her husband’s marriage to a second wife in 1986. A clan of Kokani Muslims from Bombay who migrated to Karachi in 1950, just after partition, Zakaria’s family lived in a close-knit community that kept largely to itself within the strangeness of the new country, where the military was exalted above all and women first voted in the election of 1970, which brought Zulfikar Ali Bhutto to power in an ethnically divided polity. Amina was the first of her family to attend college at that time, when the country erupted in ethnic war between East and West Pakistan and Bangladesh emerged from the ruins. An arranged marriage to Sohail promised stability and prosperity, yet no children arrived after a decade; Sohail met a woman at his bank, added a floor to his house, and installed Amina at the top and his new wife on the floor below. A week-on–week-off schedule alternating with the new wife became the humiliating compromise for Amina in her status as “half a wife,” scandalizing the community and disgracing the family. Nonetheless, the strictures of tradition prevailed, much as they did for another tragic daughter of Pakistan, Benazir Bhutto, who wed a Sindh landlord and attempted to rise above the feudal expectations of a woman of her class and lead her country fearlessly into the modern era. Zakaria chisels away chronologically at this relentless, cyclical history, and while readers continue to hope for a glimmer of positivity for these heroines, it does not come.

SONGS OF BLOOD AND SWORD
by Fatima Bhutto
Nonfiction

GETTING AWAY WITH MURDER
by Heraldo Muñoz
Indie

IN PAKISTAN
by James B. Shuman
Indie

THE STRUGGLE FOR PAKISTAN
by Ayesha Jalal
Newsletter sign-up