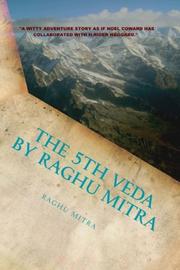 Mitra (If There Wasn’t Death, 2006) has taken the notion of a possible fifth Veda—a sacred Sanskrit text—and given it the international murder mystery treatment. Here, the discovery, and subsequent disappearance, of an ancient diary sets a treasure hunt in motion, bringing the CIA, al-Qaida and unscrupulous scholars on the trail of an unwitting computer geek. Satya Vishalguri’s connection to the missing manuscript stems from his few dates with paper-expert Padmina, who contacted him just before her murder. Teaming with Padmina’s sister—the sharp-tongued Veenalaxmi—Satya learns that Padmina had attempted to return the diary to Chatur Lal, her former professor. The two set off for Delhi to confront Lal, now paranoid after his participation in an expedition into the mountains north of Kabul, during which he both discovered and lost the mysterious manuscript, save for one unintelligible page. Soon, a few suspect characters enlist their aid to break its code: an ancient Sanskrit scholar; one of Lal’s colleagues; a billionaire who claims to be the descendant of Emperor Ashoka; and Veenalaxmi’s ex-husband, Karimba, a one-time NFL player with ties to the CIA. The plotlines and theories twist and shift, but alas, innumerable missing words, a confusing lack of punctuation and poor writing distract from the action: “Someone had taste of blood and was not hesitant to kill again. The room was searched. For that particular piece of paper or it was just random.” It’s a pity, since Mitra has concocted a thought-provoking plot with well-drawn characters, from the genial sap Satya to the continually surprising Karimba. The resolution to the mystery is a bit implausible but works within the construct of the story.

THE CODEX
by Douglas Preston
Fiction

THE RULE OF FOUR
by Ian Caldwell
Newsletter sign-up