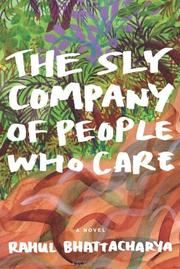 THE SLY COMPANY OF PEOPLE WHO CARE

Words as musical notes, a book as symphony—so it is with this debut novel, occasionally rippling with pidgin English and yet always sparkling with literary insights, all set within the landscape of a forgotten corner of South America.

A young writer from India travels to Guyana to report on a cricket tournament, and he becomes fascinated by the country, with its mixture of Chinese, Indian, Portuguese and African cultures. He soon returns for a year's stay, seeking a thing he cannot articulate in a setting where his Indian culture was once identified as coolieman—an indentured laborer. Both intrigued and repelled, the nameless protagonist, sometimes called "Gooroo" by Guyanan friends, takes up residence in Kitty, a dilapidated Georgetown neighborhood. There he meets Baby, a "scamp," a man who lives by lies and wiles. The two set off for the interior, Guyana's violent frontier border where "porknockers" dig into the jungle seeking gold and diamonds. Bhattacharya laces his story with colloquial conversational references—bai, skunt, banna, cyan—but meanings are mostly clear in context. The narrative is also expanded by references to reggae and ska. The novel's middle portion is less character-driven, but it does present an interesting social, racial and political history woven into a visit to Guyana's coastal rice and sugarcane producing areas. The last part finds the narrator residing on vibrant Sheriff Street in Georgetown. There he meets de Jesus and Moonsammy, and tags along on a trip to Boa Vista in Brazil, which includes an illicit border crossing. He meets Jan, an exotic mixed-race beauty, and there is an immediate sexual attraction. The novel concludes with the couple traveling in Venezuela, a sometimes idyllic, sometimes ugly sojourn. Unlike the narrator, Jan knows what she wants from life, and the romantic interlude ends and the story concludes in a fashion as bitter and unsatisfying as real life sometimes can be. An exotic locale and lyrical language make for a dazzling debut.