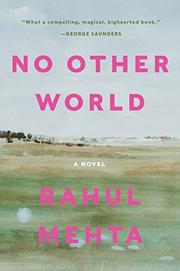 Members of an Indian immigrant family in upstate New York struggle with their individual fates and burdens over two decades.

This novel opens by setting two scenes: in 1985, a boy named Kiran Shah is spying on his neighbors across the road, the Bells, hinting at traumatic events that have transpired in the recent past and others that will occur in the future; and in 1998, in western India, Kiran, now a young adult visiting relatives, meets two members of the transgender caste, hijras, who come to the door. All of this will be spun out in succeeding sections that move back and forth in time and place to follow several narrative threads. Dominating the early part of the book are the troubled connections between the Shahs and the Bells, which include both the adults and the children. Shanti Shah, unhappy in an arranged marriage and demeaning jobs as a housecleaner and a bank teller, is powerfully drawn to the blond pastor who lives across the way—and he’s interested in her, too. Her daughter, Preeti, dates Shawn Bell, a boy who ends up sexually abusing both Shah children in incidents that resonate through the book, affecting the siblings' relationship and Kiran’s coming-of-age as a gay man. The title of the novel refers to the notion that in another world, different choices might have been made, different lives might have played out—but there is no other world. That may be so, but the book’s very omniscient narrator spends a lot of time telling us what didn’t happen, what the characters aren’t thinking, didn’t notice, or can’t know yet. This commentary ultimately begins to smudge the sharpness of what does happen. Mehta’s (Quarantine, 2011) ambitious novel follows a well-received collection of short stories; he is a writer worth watching.

Good, if muffled by an overcomplicated structure and a talky narrator.