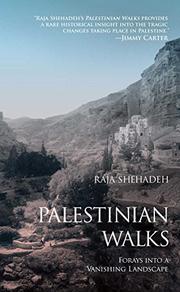 Notes on a Vanishing Landscape

An often satisfying but sometimes off-putting blend of history, natural history and political pamphleteering from a Palestinian activist, attorney and writer.

“When I began hill walking in Palestine a quarter of a century ago,” writes Shehadeh (Strangers in the House: Coming of Age in Occupied Palestine, 2002, etc.), “I was not aware that I was traveling through a vanishing landscape.” Hills are, of course, good places from which to fire down on passersby below, which has been cause enough for Israel to establish fortifications and settlements on them, displacing Palestinians and introducing new Israeli townships into the West Bank. Shehadeh’s book takes the form of six alternately meditative and combative walks from 1978 to 2006, walks that limn the geography of a region that has long seen its share of ambulatory pilgrims. The author rightly objects to the carving up and walling of the hills from a conservationist’s point of view, and he could be writing of coastal California when he laments the damage caused by the development of yuppie enclaves full of IT workers. He has a fine eye for the details of just what is being damaged: the variegated, stony earth and its fountains; cedar forests; hyacinths, crocuses and canyons; the old geography of kin and neighbor; ancient waters such as the Dead Sea, which is becoming deader by the year. One wonders, however, whether the same sort of damage would not be occurring in an independent Palestine, with its exploding population and aspirations to prosperity, all of which tend to gnaw away at beautiful spots. It does not help his argument that Shehadeh rhetorically demonizes the Israeli state and its presumed master plan for the region with pat formulas, though the searching conversation he has with an Israeli settler at the end of the book—a conversation mediated by opiated hashish—suggests that civil discourse is possible and that more of it would go a long way toward saving the hill country.

Western environmentalists will find a fellow traveler in these pages, but one with a political agenda that not all will accept.