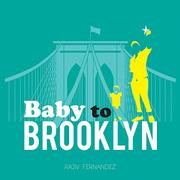 A baby’s everyday world is paired with the sites and trends of Brooklyn, New York.

The left-hand page displays something a toddler might recognize (blocks, dominoes, and a rocking horse, for instance) with corresponding landmarks claimed by Brooklyn hipsters (Brooklyn Bridge, the Domino Sugar factory, and Jane’s Carousel) on the facing page. The art is graphically interesting, with flat planes of highly saturated, digital color on solid backgrounds as simple, white captions float above. A few of the images are toddler-friendly, such as the ABC blocks that are matched with the subway logos for the J/M/Z trains, but most will prove too abstract for little ones still learning to name their world. Human figures are created by layering just some features on the negative space of the backgrounds, which means almost all lack significant facial features and several even lack limbs. Many of the scenes are quite adult (a row of tap handles from a “Biergarten” is paired with a line of kindergarten students) and others are so specific to the “hipster” parts of north Brooklyn (two people running to catch the always-too-short-for-the-platform G train; a passenger “manspreading” on the L train) that they might not even be understood by residents from south Brooklyn.

The perfect baby-shower gift for Brooklyn hipsters, but all others, including the core baby-toddler audience, should “Fuhgeddaboudit.” (Board book. 1-3)