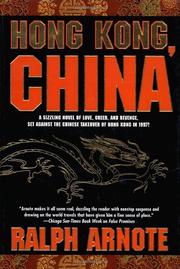 Arnote, an old paperback mystery hand, debuts in hardcover with a trashy and rather tedious tale of Hong Kong on the eve of its reversion to China. Luscious Lacy Locke, senior VP at a Wall Street investment bank where she specializes in Pacific Basin markets, decides to gauge for herself what risks (political or otherwise) might be involved in the Communist mainland's imminent takeover of the Crown Colony. Once she's in the bustling Far East city, Lacy (whose marriage to a philandering TV newscaster is near the breaking point) meets with Claude Van Hooten, an entrepreneurial Dutchman who, with more than a little help from his live-in lover Moia Hsu, has built a very successful fashion-apparel enterprise that could be taken public. The daughter of an influential government official, Beijing-born Moia has considerable clout with the Red regime, owing to her skills in economic development. She has at least one enemy as well, the unsavory Liu Wing (a general in the People's Liberation Army) who loved and lost her. From her base at the Mandarin Hotel, Lacy also renews acquaintances with Brandon Poole, a billionaire Brit whose fortune grew with Hong Kong's emergence as an Asian outpost of unfettered capitalism. In point of fact, she spends appreciably more time with Brandon on the social circuit than in taking care of her employer's business, and as the handsome hardbodies frolic together, the insanely jealous PLA commander takes it upon himself to firebomb one of Claude's factories. A take-charge kind of guy, Brandon dispatches the general and prevails upon Lacy (who gives her husband his walking papers via phone) to consider bearing him an heir, while Claude weds the pregnant Moia. At the close, all sail off aboard a comfortably appointed vessel from Brandon's fleet, hedging their bets on Hong Kong's uncertain future. Given the inane plotting and witless dialogue (``Good company and a fine breakfast have totally cured my jet lag''), many readers may ask: Where is James Clavell now that we need him?