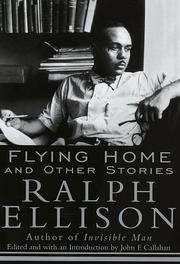 This marvelous collection of 13 stories, six of which were never published during Ellison's lifetime, partly explains the phenomenon of Invisible Man, itself no ordinary first book. Had Ellison published this volume first (all of these narratives were written before his landmark novel), it would have been the debut of a voice to reckon with, if not the heavenly choir of Invisible Man. This early work improvises on some of Ellison's great themes: the way in which stereotypes obscure and deform our common humanity; the quest for a distinctly American identity; and the promise of democratic culture. A quartet of stories about youngbloods Buster and Riley—an embryonic novel of sorts—shows the fully absorbed influence of Twain. Ellison's Huck and Tom, full of innocent devilment, laze away the days signifying, doing the dozens, and just getting into trouble. In a brilliant down-home retelling of the Toussaint L'Ouverture story "Mister Toussan," Ellison's charming miscreants find precedent for their own rebellious desire to snatch cherries from a white man's yard. Three railroad tales document the plight of "black bums" who are treated with particular harshness by the guards. "I Did Not Learn Their Names" recalls a kind, elderly couple riding the rails to visit their son—a hard-luck story that suggests the happiness sometimes found in adversity. The struggling black railroad workers in "A Hard Time Keeping Up" finally give in to hilarity, a kind of release, at a late-night joint. While one young man finds momentary power onstage at a matinee bingo game, another is profoundly mortified when he crashes his plane during training as a military pilot. "In a Strange Country" is pure Ellison: A black sailor, fresh from a racial incident with a countryman, discovers in a local Welsh singing club the sense of transcendent national pride and unity he longs for back home. Glorious, pre—Invisible Man riffs—and another fine addition to the Ellison oeuvre.