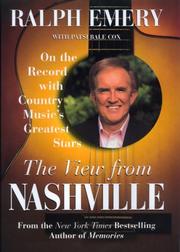 THE VIEW FROM NASHVILLE

This collection of memoirs from the veteran Nashville musician, disc jockey, and broadcast personality is full of good-natured humor and thoughtful insights. Emery begins on a somber note, with a recap of Conway Twitty’s untimely death and the ensuing battle of his estate with his third wife, Dee, and his children, who viewed Dee as opportunistic and flighty—particularly when she moved to have his body exhumed and cremated, only to withdraw the request a few days later. While many of his subjects (Patsy Cline, Tex Ritter, Carl Perkins) are likewise dead, Emery’s tone seldom sounds morose after the Twitty section. Instead, he’s apt to recall humorous instances, such as Maverick Records founder Fred Foster’s run-in with old-time Nashville bigshot Wesley Rose, who objected to Foster’s making “race records,” and how Foster was reassured by legend-in-the-making Owen Bradley, who told him, “You keep doing what you’re doing—making great records.” Some of Emery’s best stories concern unlikely country music figures, such as Ray Charles, who recorded a crossover hit with “I Can’t Stop Loving You,” and George Bush, who defends his taste for country music despite his patrician background. Emery’s perspective is refreshing: though no longer young, and obviously a conservative politically, he keeps alive a positive attitude toward change. He can condemn the “reverse discrimination” of a word like “hillbilly” and at the same time express indignation over some Nashville establishment icon’s treatment of black country musician Charley Pride . . . and never lose his credibility. His telling of white country singer Faron Young’s support of Pride is among the most poignant vignettes in the collection. (Co-author Cox also co-authored Tanya Tucker’s autobiography.) Fans of any kind of music can open this at any page—and enjoy it. (16 pages b&w photos, not seen) (Author tour)