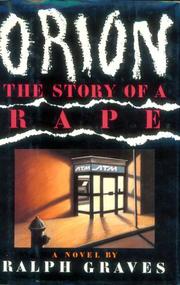 A young New York radio reporter endures a vicious rape and its aftermath. Graves has also written about the Philippines (Share of Honor) and rich WASPs (August People). No-holds-barred realism and authentic police procedures are the distinguishing features in this well-meant but awkwardly didactic effort to depict as exactly as possible what a woman endures during and after rape. Pretty, privileged, and white, Nancy Whittredge is a rising star at an all-news station in Manhattan who, after removing some cash from an automatic teller on her way home, is robbed by two black men, then repeatedly raped, threatened with death, and forced to remove the rest of the money from her checking account. Promptly reporting the crime, Nancy begins the ordeal that must be endured by any rape victim who seeks justice. Fortunately, she's immediately paired with a well-trained victim's- assistance volunteer who stays with her through the humiliation of the physical exam and begins to restore her self-esteem. Against the wishes of her wealthy, overprotective parents, Nancy takes all the right steps, working closely with the police even when their procedures seem unbearable. She tells her story again and again, reviews thousands of photographs, and provides all available clues until the she and the police put a name to one of her assailants, working with great success on the coincidental rape of a soap-opera star all the while. Throughout the ordeal she receives estimable support from her boss and co-workers. Her pudgy, yuppie boyfriend and lifelong chum-roommate are less helpful. Well-meaning but too transparently utilitarian to succeed as a novel. Rather like a long Reader's Digest feature.