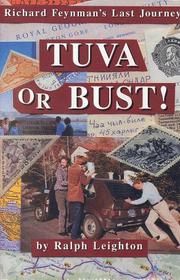 Alas, Feynman never got to make the journey. His stomach cancer caught up with him and he died in 1988. Leighton, the high-school math teacher who was Feynman's close friend, fellow drummer, and chief amanuensis (with two wonderful Feynman-told- to-Leighton biographies to his credit) narrates the saga of what began as a typical Feynman tease: Leighton, complaining that math was okay, said what he really wanted to teach was geography. Feynman, testing his knowledge, asked ``Whatever happened to Tannu Tuva?'' Therein lies the tale. Tuva, to young stamp-collector Feynman, had been a set of handsome triangular and diamond-shaped stamps. Once an independent country northwest of Mongolia, it was annexed to the Soviet Union in 1944. What's more, its capital was spelled Kyzyl- -enough of an absurdity to make getting there the cause cÇläbre that would occupy Feynman and Leighton for the next ten years. It was the Soviet bureaucracy that did them in. First, they were told that since there was no Intourist agency there, it was no- go. Undaunted, they proceeded to track down every Tuvan authority in the world, and found grammars, phrase, and travel books that only whet their appetites more to see the yurts, yaks, and nomads, explore the art and ruins, and hear the native ``throat'' singers—able to sound two vocal lines simultaneously. They learned to write fractured Tuvan and ultimately arranged to have a major show of nomadic art tour the US. But the bureaucratic confusions and conflicts between Moscow and Tuva and Los Angeles, not to mention demands for rubles, always snatched the prize just when it was in sight. Since the book focuses more on the frustrations of making the trip and less on Feynman, it is not as satisfactory as the earlier books. On the other hand, it says a lot about coping with the bureaucracy and, yes, Leighton did eventually make it to Tuva.