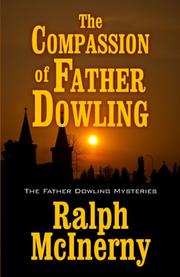 THE COMPASSION OF FATHER DOWLING

Sixteen short stories dating from 1992 to 2002, all save one previously published in Catholic Dossier.

McInerny, who passed away last year, had a wry touch with the foibles of the senior citizens who congregated at St. Hilary’s. Series regulars featured here include busybody Marie, the residence housekeeper, and her arch rival Edna, the gym-turned-elder-center volunteer; Amos, Fox River’s most successful attorney, and Tuttle, its most slapdash; competent police veterans Keegan and Horvath, and ne’er-do-well Peanuts Pianone. And, of course, there’s the steadying presence of Father Dowling himself, enjoying his pipe, his non-decaf coffee and his abiding morality. Among the problems arising in the collection are counterfeit $50 bills left in the collection plate, a key to riches embedded in a coffin’s satin lining, art theft and death by a scarf, by poison, by blunt instrument and by asphyxia caused by a whack by a car trunk. “The Fat Cat,” arguably the collection’s drollest story, revolves around a deceased feline, but perhaps the most troublesome antics at St. Hilary’s are caused by love, which causes geriatrics to act like teenagers, gossip to run amok and family members to cuddle up to weapons of their choice.

A genteel assembly, with a nod to Catholic mainstays like Bingo and approaching decrepitude, from an author who will be missed.