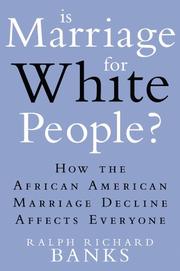 IS MARRIAGE FOR WHITE PEOPLE?

How the African American Marriage Decline Affects Everyone

A scholarly account of African-Americans’ encounters with the marriage gap.

In his debut (Law/Stanford Law School), Banks explores the marriage gap between African-Americans and whites, concluding that fewer African-Americans marry and stay married due to “the changing conception of marriage, and the changing educational and economic positions of men and women.” Add to this the “numbers imbalance” between the wide array of eligible African-American females and an African-American male population in short supply—an unevenness Banks attributes to incarceration, interracial marriage and a lack of economic opportunities for black men. Banks argues that while many African-American women seek out highly educated African-American men, these same men are statistically more likely to date women outside their own race, prompting the pool of prospective suitors to dwindle further. As a result of this imbalance, many African-American men find little incentive to engage in a monogamous relationship: “Why cash in when you can continue to play?” The author writes that “[b]lack men maintain nonexclusive relationships for the same reason as other men: because they can.” Banks tempers his statistically driven arguments by weaving in intriguing personal interviews. This technique, both quantitative and qualitative in its approach, provides the groundwork for a brave and convincing argument—one that reveals a startling trend in the decline of African-American marriages. A triumphant work that demystifies the intersection between compatibility and color.