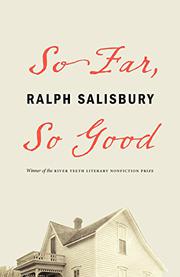 SO FAR, SO GOOD

In the autumn of his life, a writer reflects on the poignancy and power of minor moments in a changing world.

Salisbury’s (English Emeritus/Univ. of Oregon; The Indian Who Bombed Berlin, 2009, etc.) memoir, which won the River Teeth Literary Nonfiction Prize, defies easy classification. Inspired by his daughter’s request to “put some of our family's realities down, with no fictionalizing and no poeticizing, just things as they were,” Salisbury strives to live up to the challenge. But it proves challenging, indeed, particularly for a writer with roots in poetry and influenced by the oral tradition. Salisbury’s unconventional stream-of-consciousness style shatters any semblance of a tightly wound narrative. Instead, his unapologetically indulgent work is populated by remembrances of a bygone era, depicting a version of rural America long lost. Yet readers will forgive Salisbury his trespass and embrace his work for its humanity. The author’s America reveals a landscape overflowing with hogs, cow pies and corn silks, novelties for the 21st-century urbanite. From birth to adolescence to war and back again, Salisbury hones in on the quieter moments of life. Steering clear of melodrama, he depicts a world captured in sepia tones, in which understated prose and humble observations best reflect the world that passed him by. “Whatever is here I offer to the world,” he writes, “knowing that my life is but one of a multitude of lives, all doomed to undergo change and, I believe, to go on and on, in the Great Plan, which, perhaps, we humans can, in our best moments, somewhat sense.”