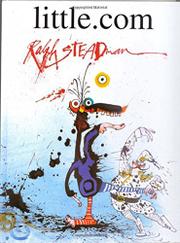 When your computer powers down, the little “dot” is off-duty. You don’t think it just sits there, do you?

In this tipsy flight from Steadman, originally published overseas in 2000, the tidy dot on the first page is quickly transformed into mad splotches of black sporting googly eyes. It zooms through cyberspace to have tea—or, rather ink (“I LOVE INK!”)—with “my friend the Duchess of Amalfi,” and then goes off to spatter the besieging Duke of Bogshott and his white-uniformed army. Serving largely as an excuse for the illustrator to wield pen and brush ever more ferociously across a series of spreads, this free-associative plotline culminates with an invitation to attend the wedding of the duke and duchess as “Best Dot” (“I was so excited I made a mess on her carpet”) and a quick return home: “And here I am, ready to work for you again—dot dot dot.” As a clever riff on the internet, this doesn’t hold a pixel to Randi Zuckerberg and Joel Berger’s Dot. (2013) or Goodnight iPad by “Ann Droid” (2011), and the illustrator’s whacked-out mite isn’t going to take young readers on the sort of imagination-stretching artistic rides that Peter Reynolds’ The Dot (2003) or Hervé Tullet’s Press Here (2011) offer. But it does at least dispense exuberantly unrestrained permission to paint outside the lines.

The artist’s fans might key in, but most young readers will be left in the dark.