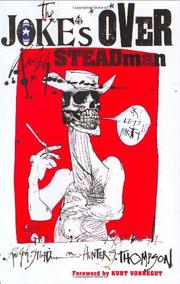 The original art director of all things gonzo, Steadman recalls 30 years of mythic adventures with the Master.

The Welsh graphic artist first encountered Hunter S. Thompson, who greeted him with a shot of Mace, in 1970. Their collaboration on a report about the depravity of the Kentucky Derby (now a collector’s item) marked the legendary birth of a special form of journalism. The pair went on to cover the America’s Cup, the Ali-Foreman match in Zaire, life in Hawaii and the 1972 political conventions. They produced their masterwork, Fear and Loathing in Las Vegas, in 1971. Steadman had no share in that copyright, an omission he didn’t notice then but is plenty mad about now (which might explain his dubious claim that “the book was noticed mainly for the drawings”). Up through Thompson’s suicide last year, theirs was not an easy relationship. Hunter’s feet stank, his friend reports. He hated Steadman’s attempts at writing, and “Hunter’s friendship was also a business agreement. . . . He was much more into deals than personal affection.” Yet Steadman chronicles three decades of bonhomie: swigging Wild Turkey at Owl Farm, driving dangerously, indulging in lots of dope and not a few guns. (They even do some shooting with William Burroughs.) Much of this memoir consists of letters to and from Thompson. Relying on repetitive, puerile, insult comedy, the correspondence is hardly on par with Bernard Shaw’s or even Groucho Marx’s missives. Bitching about the state of the world and listing America’s faults, the author begins in this text to sound like an old man wandering and cursing, lost in a shopping mall.