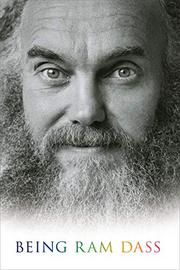 by Ram Dass with Rameshwar Das

A comprehensive memoir from a famous but humble spiritual seeker.

Mention the name Ram Dass (1931-2019), and you’re likely to hear three words: Be Here Now. However, there’s much more to the man born Richard Alpert than his best-known book, as this posthumous memoir, co-written with Das, makes amply clear. Born just outside of Boston to an ambitious Jewish family, he quickly became a hungry spiritual seeker. He ran with fellow Harvard psychology professor Timothy Leary, and together they became pioneers in hallucinogenic research. As he explains, psilocybin and LSD, which were legal when he began his studies, were a means of exploring other planes of consciousness, a rationale that didn’t keep him from getting fired for turning on an undergraduate student. One can imagine such a book by another author—say, Leary—as full of chest-puffing and war stories. Thankfully, on his road to enlightenment, Ram Dass also accumulated a good deal of humility. This comes across clearest in the sections that find him in India, where he became a disciple of the Hindu guru Maharaj-ji, who taught the young American pilgrim how to love and worship without using drugs—and gave him his new name, which means “servant of God.” “Turning toward Eastern spirituality was not just my inner evolution but part of a major cultural shift,” writes the author, who proves to be a steady guide to some heady events and trends, including the Harvard psychedelic tests, the communal living experiment in Millbrook, New York, the Human Be-In in Golden Gate Park, and the influx of Westerners flooding India in search of a higher state of being. Familiar names walk in, walk out, and often return: Allen Ginsberg, Aldous Huxley, Ken Kesey, and the members of the Grateful Dead.

Ram Dass lived a full life and then some. His final statement is thorough and, yes, enlightening.