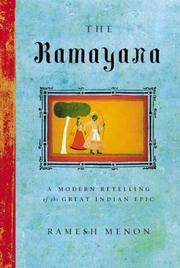 One of the ancient world’s great verse epics is retold in energetic English prose in this sparkling volume, the work of an obviously accomplished Indian novelist and journalist.

The Ramayana, or “Tale of [Prince] Rama,” was composed in seven books containing 24,000 couplets by the Sanskrit poet Valmiki, around 300 b.c. It’s the “shorter” Indian (Hindu) epic (compared with its massive counterpart, The Mahabharata), a much-loved classic that continues to inspire works of visual art and dramatic performance. Like the epics of Homer and Milton, The Ramayana straddles earth and the unearthly regions, beginning with the bargain that malevolent “demon king” Ravana makes with the god Siva, who gives the mortal supernatural strength (but not immortality). The tale then focuses on childless King Dasaratha of Ayodha, the gift of four sons (borne by four wives) granted him by the god Vishnu, and the exploits of Dasaratha’s favorite son Rama (a “perfect man” who is in fact an incarnation of Vishnu). Some of this rich story’s most dramatic sequences include the contest of strength in which Rama wins the hand of the beautiful Sita (as much a paragon of virtue as himself); the intrigue perpetrated by one of his father’s wives, that consigns Rama to 14 years’ wandering in a vast forest; the abduction of Sita by Ravana, and the arduous process whereby Rama defeats the powerful demon and wins back his bride; and the ordeal by fire through which the ostensibly compromised Sita triumphantly proves her fidelity, and is fully reunited with her husband. A fascinating further dimension is added when Rama joins forces with Sugriva, King of the Monkeys, which creatures, led by their brave general Hanuman, enable the prince to infiltrate and destroy the demon-king’s evil empire. Nor is rousing adventure all that’s offered here. The characterizations of heroic Rama, stoical Sita, Rama’s stalwart brother Lakshmana, and especially the satanic Ravana are unusually full, complex, and preternaturally vivid.

A masterpiece made new for a generation of readers who ought to be very grateful indeed to Menon.