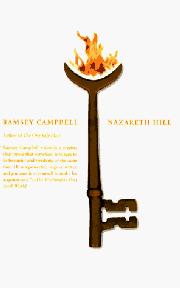 British horror novelist Campbell (The One Safe Place, 1996, etc.), expert as ever and with a knack for family chitchat amid the ghoulies, returns with the house from hell. Insurance agent Oswald Priestley, a widower, and his teenage daughter Amy move into Nazareth Hill, a gray office building gutted by fire and revamped for apartments. None of the tenants of the looming skull-like house know that hundreds of years ago Nazareth Hill was a mental asylum where inmates were tortured—or that several ectoplasmal folks, their jaws yawning and arms dropping off, linger. One dark night, the arachnid-phobic Oswald walks into what seems at first to be a huge dangling spider outside—but it's only a dying black cat hung from an oak. Although the oak is soon chopped down for safety's sake, since it creaks with age, people can't seem to hear the woodsmen's axes or, indeed, anything outdoors through their closed windows. And then the photographer on the first floor dies while developing a group picture of the tenants; again, oddly, the negative seems to have added a ghostly extra figure not in the original group. Most of the story follows Oswald's deteriorating relationship with Amy, who goes on the radio to announce her fears about Nazareth House and then transcribes diary notes written in the margins of an old Bible by an inmate. Oswald tells Amy she did the writing in the Bible. Meanwhile, Amy comes down with massive headaches as her fears build; shredded cobwebby figures begin to chase her through the house. When her father goes mad and locks her up in her room, the old horrors of the asylum reemerge in full force. An unforeseeable climax refreshes with its absence of clichÇ. Shocking surprises, alarming horrors, and believable characters—all expertly blended in a fresh, deft shocker.