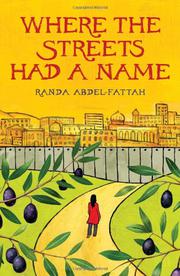 WHERE THE STREETS HAD A NAME

As she did in Does My Head Look Big in This? (2007) and Ten Things I Hate About Me (2009), Abdel-Fattah introduces a bright, articulate Muslim heroine coping with contemporary life, this time during the West Bank Israeli-Palestinian conflict in 2004. After the Israelis confiscate and demolish their home, 13-year-old Hayaat and her Palestinian family endure curfews, checkpoints and concrete walls, exiled in a cramped apartment in Bethlehem. Hayaat’s father silently mourns his lost olive groves, while her grandmother longs for the Jerusalem home her family abandoned in 1948. With her face scarred by shattered glass, Hayaat wears her own reminder of the occupation. Determined to retrieve some Jerusalem soil for her ailing grandmother, Hayaat and her Christian pal, Samy, secretly embark on a short but harrowing mission into forbidden territory. Hayaat chronicles this life-altering journey in the first-person, present tense, giving readers an intimate glimpse into the life of her warm, eccentric Muslim family, who survive despite the volatile political environment. A refreshing and hopeful teen perspective on the Israeli-Palestinian dilemma. (glossary of Arabic words) (Fiction. 9-12)