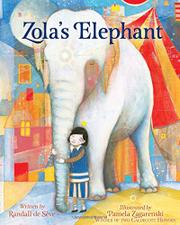 When Zola moves into the house next door, a young girl imagines all of the reasons why a friendship between them is impossible.

Spying a giant moving box, the narrator immediately concludes that it contains Zola’s pet elephant. Smelling toast, she imagines Zola merrily feeding her pet. In contrast, Zola is shown in a room piled with drab boxes, despondently taking tea and toast with only her pet bird for company. Each brightly bedecked fantasy about Zola and her pachyderm playmate is a facet of the narrator’s cloaked fear of rejection by the newcomer. Readers are poignantly aware, through Zagarenski’s contrasting gray compositions of Zola’s actual circumstances, that she’s lonely and bored. Finally, the narrator’s lively imaginings provoke both curiosity and courage: “I like stories… / and clubhouses / and playing hide-and-seek / and taking bubble baths / with elephants.” Her own stuffed elephant under one arm, she knocks on Zola’s door, discovering that the huge crate contains—a sofa. “Okay, so maybe Zola doesn’t have an elephant. / But do you know what she does have? // A new friend.” De Sève’s well-paced telling is charmingly abetted by Zagarenski’s layered multimedia paintings. The artist’s Klee-esque colors and signature symbols—stars, crowns, houses, bees, and more—will provide fertile ground for young readers’ own imaginings. They depict both girls as pale-skinned, the narrator with fluffy red hair and Zola with straight, black hair.