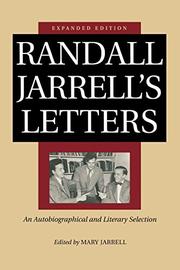 A vivid collage of moments from the life of one of the most intense and, at times, brilliant figures in modern American poetry--but how much has been selected out? The 400-odd letters printed here by Jarrell's widow have been chosen as ""the most literary and biographical"" among the 2500 extant, while the love letters written to Elisabeth Eisler and Mary Jarrell herself have had their ""romantic surroundings"" clipped away. What we get, in any event, is a convincing picture of a dynamic, driven artist. Jarrell (1914-1965) was an outgoing loner, quick-witted and sharp-tongued, an incisive (some would say, savage) critic, a lover of women and cats (his two marriages were childless), a gifted teacher (mostly at Woman's College of the U.N.C., Greensboro), a Marxist turned apolitical (though he wept openly over JFK's assassination), a first-rate tennis player and sports car fanatic, a born enthusiast (for European culture, German poetry, the work of friends like Robert Lowell and Adrienne Rich) who died in grim depression. Whether as an Air Force trainer in WW II or as Literary Editor of The Nation (1946-47), Jarrell always knew exactly what he thought, and he wasted no time spelling it out. ""I feel so rotten about the country's response to the bombings at Hiroshima and Nagasaki,"" he told a friend, ""that I wish I could become a naturalized dog or cat."" Describing Karl Shapiro (whom he liked), Jarrell said, ""Shapiro loves, partly out of indignation and partly out of sheer mischievousness, to tell the naked truths or half-truths or quarter-truths that will make anybody's hair stand on end; he is always crying: 'But he hasn't any clothes on!' about an emperor who is half the time surprisingly well dressed."" The editor ends on a dubious note as she reviews the details of Jarrell's death (he was struck by a car while walking along a highway outside Chapel Hill) and insists that it was accidental, despite the fact that some six months before he had attempted suicide by slitting his wrist. But, whatever the truth about Jarrell the manic depressive or Jarrell the lover, these letters give us a graphic sense of this boyish (""Gee's"" scattered throughout), mercurial, passionate character. An important collection.