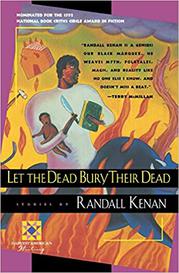 LET THE DEAD BURY THEIR DEAD

Kenan follows his first novel (Visitation of the Spirits, 1989) with a captivating, baroque history of fictional Tims Creek, North Carolina, whose citizens—both black and white—have experienced more than their share of unearthly wonders.

Tims Creek looks to outsiders like a dull North Carolina backwater settled by the descendants of slaves and slaveholders, now farmers, shop owners, factory workers, and general layabouts. But locals, as Kenan makes clear in the telling, know that nearly every dwelling in this fertile country houses a fascinating, if rarely flattering, tale. The Pickett house harbors the legend of three-year-old Clarence, who foretold his neighbors' fate (whether or not they wanted to hear it) and communicated with the dead until they called him to join them at the age of five; the rundown Williams shack shelters young Dean Williams, who foolishly agreed to seduce the town's richest black man in exchange for the promise of a job as a factory foreman; in the Pearsall home, a middle-aged mother unravels to the point of infanticide; and on her own front porch, old Maggie MacGowan Williams tries to come to terms with the fact of her beloved grandson's homosexuality. In coloring in the background of a town founded by runaway slaves, sustained by hypocritical preachers and ambitious exiled intellectuals, and taken over by bloodless modern-day manipulators—a land in which the dead live side by side with the living and the good fraternize with evil as a matter of course—Kenan switches unpredictably from the seductive rhythms of traditional folk tales to a drier, more distanced narrative voice, and even, in the title story, to a playful takeoff of a scholarly oral history, complete with lengthy footnotes.

A wildly uneven but always original portrait of a southern community—and a stimulating collection of tales by a courageous and humorous author.