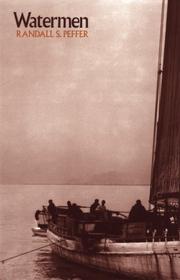 What with one book and another, the Chesapeake has been pretty well worked over--and still there's a fascination in the skipjacks as the one U.S. fishing fleet under sail (thanks to an 1865 Maryland conservation law), in the tricky, inbred life of the islands and bay. Peffer, a young prep-school teacher, went to Tilghman Island thinking to ""investigate my ancestry,"" and, finding no trace of his roots, proffers instead some island lore and some la-di-da apotheosizing. More profitably, he works on a skipjack--Bart Murphy's old tub--dredging oysters from November to Easter (come the winter freeze, Murphy builds an iceboat--""He had seen a picture""--and the men dredge through holes in the ice); takes a hand at ""snakin' "" eels in May (""Eels,"" says one burly waterman, ""is proper spring business. Something sexy about it""); sets trotlines for crabs and goes clamming in the summer; and, betimes, signs on Bob Marshall's sport-fishing boat--where Peffer, always the greenhorn, learns to make lures, gall the edgy customers' catches, and appreciate Marshall's savvy about men and fish. He also acquires--and, in a race, mercifully sheds--the reputation of being a ""Jonah,"" or bad luck; and finds men who bad shunned him greeting him on the street. ""Clammers, driftnetters, crab potters, sport fishermen, and seafood buyers said they could find work for someone who could cast off a Jonah with such a flourish."" That's the logic-defying, legend-spawning crux of it--which Peffer effectively pins down.