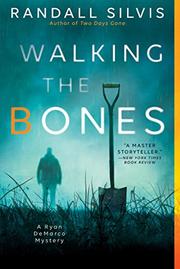 Will Sgt. Ryan DeMarco, already so traumatized in his first recorded case (Two Days Gone, 2017), ever fully rejoin the human race? Seven dead girls do their best to pull him back in.

Still haunted by the death of his friend professor Thomas Huston and his own troubled family history, DeMarco’s at the point of announcing his retirement from the Pennsylvania State Police when his lover, Trooper Jayme Matson, and his supervisor, Cmdr. Kyle Bowen, scheme to get him to take a temporary leave instead. Now that he’s got nothing to do but wrestle demons, from his estranged wife to their baby son, who was killed in a car accident, it seems as if it might be positively therapeutic for him to look into a case that swims into his ken during a visit to Jayme’s family in Aberdeen, Kentucky: the discovery four years ago of the skeletonized corpses of seven young women immured in a wall in the First Baptist Church. The victims, all African-American teenagers, had gone missing between 1998 and 2004. The local police had long given up the case, and the gruesome discovery provided no new leads they could follow. But a group of three elderly citizens calling themselves the Da Vinci Cave Irregulars think DeMarco and Jayme are just the people to solve a case that weighs as heavily on the town as DeMarco’s memories do on him. Although DeMarco quickly identifies four leading suspects—First Baptist pastor Eli Royce, former church caretaker Chad McGintey, Chad’s missing successor, Virgil Helm, and pedophile ex-teacher Aaron Henry—the investigation proceeds at a glacial pace. For every two steps forward, DeMarco takes three more steps back into his childhood abuse by his father and his continued mourning for his son. And no matter how keen his interest in the case becomes, it remains overshadowed by his fear: “I’m becoming my father.”

Further evidence, if any was needed, that all the author’s heroes are direct descendants of Edgar Allan Poe, whom Silvis’ own fictionalizations of (Disquiet Heart, 2002, etc.) successfully dramatized without exorcising.